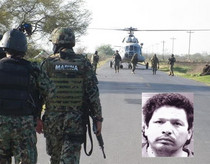 Mexican national Bruno Garcia-Arreola, a/k/a “El Gato,” an alleged leader the Sinaloa organization that sends tons of marijuana from Mexico to the United States, was extradited by Mexico’s Ministry of Justice to face a federal indictment in the Eastern District of New York that charges him with drug trafficking conspiracy and bail jumping.

In 2003, Arreola was arrested in Las Vegas by Special Agents of the Drug Enforcement Administration after a lengthy investigation in which two tons of marijuana and $11 million in cash were seized.

The DEA had lured Arreola to Las Vegas where he traveled by private plane from Mexico. Subsequent to his arrest, and over the objection of federal prosecutors, Arreola was released on an unsecured $20,000 bond but failed to appear in federal court in the Eastern District of New York.

He was then indicted, and the apprehension responsibility for his capture was delegated to the United States Marshals Service (USMS). The USMS New York/New Jersey Regional Fugitive Task Force, assisted by Interpol and Mexican law enforcement authorities, spent years searching for Arreola and finally apprehended him in Mexico in April 2011.

DEA Acting Special Agent-in-Charge Plummer stated, “This extradition brings one of our most wanted fugitives back to New York to face criminal allegations. DEA and our international, federal and local law enforcement partners have succeeded in removing one more name from our fugitive list – Bruno Arreola.”

If convicted on the drug conspiracy charge, Arreola faces a mandatory minimum sentence of ten years’ imprisonment and a maximum life sentence.

Sadly, officials from the Obama administration turned down pleas from lawmakers and public-interest groups to place the names of Mexican drug cartels on their list of designated terrorist organizations.

The “terrorist organization” designation would give U.S. law enforcement agencies the authority to use such measures as the Patriot Act to crack down on suspected drug cartel members and associates using tools such as seizing their bank accounts or imposing harsher prison sentences for gun possession.

The issue arose during a House Homeland Security subcommittee hearing on border security. Top members of the U.S. House of Representatives on called on Secretary of State Hillary Clinton to support the designation of certain Mexican drug cartels as terrorist organizations.

U.S. Rep. Peter T. King (R-NY), Chairman of the Committee on Homeland Security, and Rep. Michael T. McCaul, Chairman of the Subcommittee on Oversight, Investigations, and Management also requested that Secretary Clinton develop a comprehensive strategy to assist the Mexican government win their war against the violent and deadly cartels such as Los Zetas, who are suspected of murdering an American law enforcement agent.

As reported in the Law Enforcement Examiner, in a joint letter to Secretary Clinton, the Members wrote that “the Mexican drug cartels present a dangerous threat to the national security of the United States.”

This article was written by Jim Kouri and published by the Examiner on November 13, 2011.

We previously discussed the extradition treaty between the United States and Mexico here.

The author of this blog is Douglas McNabb. Please feel free to contact him directly at mcnabb@mcnabbassociates.com or at one of the offices listed above.

This entry was posted on Tuesday, November 15th, 2011 at 1:24 pm and is filed under International Extradition Attorneys - McNabb Associates. You can follow any responses to this entry through the RSS 2.0 feed. Responses are currently closed, but you can trackback from your own site.